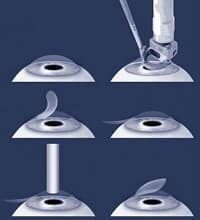 Epi-LASIK is a method of correction of visual function, which allows to conduct the laser vision correction, even in low thickness of the cornea. This intervention retains all the advantages of LASIK method and helps to restore the vision.

The indications for using Epi-LASIK

The main boundaries of using of the technique of laser vision correction are:

The procedure of laser correction of visual function with the method of Epi-LASIK is performed as follows:

1. Performs the surface anesthesia using special drops. After that the lid speculum is imposed, which will prevent the involuntary blinking during the operation.
2. In the process of correction of the procedure with Epi-LASIK the surgeon using the keratome forms the flap only from the surface (epithelial) cells of the cornea.
3. The doctor does not use the microkeratome, equipped with a blade and with a special epikeratoma performs peeling and separation of the flap of epithelial cells.
4. After forming the flap from epithelial cells produced the laser correction of the cornea is conducted.
5. At the final stage the epithelial flap, which is previously formed, is returned to its original place. Suturing isn’t required. After that, a special protective soft contact lens that prevents trauma and faster healing is placed on the surface of the cornea. This lens can be removed usually after three to five days. Dates are determined by the state of the epithelium of the corneal.

After this, with the presented scheme the correction is conducted on the second eye.

The advantages of Epi-LASIK method

To the advantages of this technique the followings are included:

According to the studies where the effectiveness of the refractive correction with the method of Epi-LASIK was evaluated, during the first day the visual acuity equal 0,5 was determined in the operated patients. During the next two days, this figure was 0.6-0.8. During the three days the full recovery of visual function was usually conducted. The average level of the pain was 1,34, and the highest value was 6 (0 - no pain, 10 - maximum pain that the patient had ever experienced).

The vision correction with the method of Epi-LASIK is nearly painless and safe. As a result of the gained experience no cases of perforation of the epithelial flap in the central area or the stroma damage has been revealed. There were also no cases of the corneal clouding fixed.

The period of rehabilitation

In most cases (87%) patients were willing to return to the usual life including work, 2-3 days after the operation with the method of Epi-LASIK. In all cases of the observation the good regeneration of epithelium was revealed, and in 97% of cases, the quality of the stromal bed and the flap was assessed as excellent.

The price for Epi-LASIK

The cost of the operation with the method of Epi-LASIK at the "Moscow Eye Clinic" is 30 000 rubles (per eye).