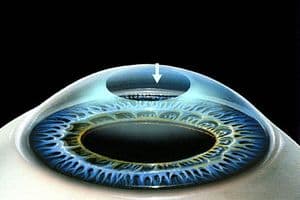 Photorefractive keratectomy is the first method for the vision correction by the excimer laser. For the first time such correction was performed in 1985 in Berlin and was represented by an excimer laser exposure (non-contact) on the surface layers of the cornea, without affecting its internal structure.

Like the technique of radial keratotomy, the cornea was exposed, thought the application of notches is not required. The shape of the cornea hull was changed under the influence of the laser that vaporized the tissue from the surface. The highest precision allows to achieve a good predictability of the result, significantly reduced the side effects. However, the patient still felt unpleasantly during the reduction of the surface layer (up to 4 days), the complete adaptation, thus ended after 3-4 weeks. The laser vision correction with this method was not immediately performed on both eyes.
To exclude such moments, PRK correction has been modified. Today, after the laser exposure the special protective lens is used, which makes it possible to shorten the recovery period. In addition, the advanced technology allows to conduct the vision correction of both eyes simultaneously. This method is used only for medical prescribtions where the correction of other ways is impossible.

Stages of the operation

Anesthetic drops are instilled into the patient’s eye (general anesthesia and injections are not applied).

Laser correction procedure with the method of PRK is performed on an outpatient basis and after it the patient may go home immediately. Laser vision correction changes only the outer layers of the cornea without deep interference. The laser operates in the scanning mode, "smoothing" and "modeling" the corneal surface, which provides an accurate forecast results. However, during the laser irradiation the surface layer of the cornea, including the epithelium and Bowman's membrane is damaged, therefore eliminating the visual discomfort the special protective lenses are applied.

The cost of PRK

The prices for all types of laser vision correction, carried out at the "MEC" can be found in the section "Prices".